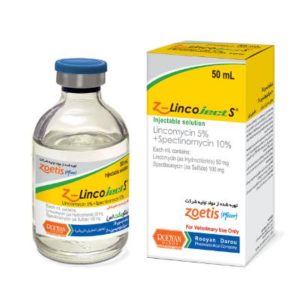 Lincomycin is produced by Streptomyces lincolensis and is readily soluble in water.

Spectinomycin is produced by Streptomyces spectabilis which, is slightly alkaline and soluble in water.

Lincomycin belongs to group of lincosamide antibiotics with bacteriostatic properties. It binds to 50s unit of bacterial ribosome and inhibits protein synthesis. Place of binding of this antibiotic to bacterial ribosome is near to binding place of chloramphenicol and erythromycin. Possibly some parts of these sites are common for these antibiotics that can explain the antagonism between lincomycin and erythromycin.It also can be the reason of resistance to lincomycin due to lack of its ability to attach to bacterial ribosomes. Spectinomycin belongs to Aminocyclitol group of antibiotics which inhibits protein synthesis by binding to 30s unit on bacterial ribosomes.Laboratory tests have proved that simultaneous use of these antibiotics has better effect than using them separately against mycoplasma and bacterial species.The peak of serum level for Lincomycin is achieved 4-6 hours after injection. It is widely distributed in body and its concentration in most tissues such as bones reaches to a suitable level. The highest concentration is achieved in kidneys and liver. The lowest concentration is detectable in cerebro-spinal fluid (CSF).Lincomycin is metabolized in the liver and excreted via bile (Faeces) and urine. Spectinomycin is well absorbed after injection and reaches its maximum plasma concentration within one hour. It does not enter eyes and CSF and its molecular ability for protein binding is low. It excreted into urine via glomerular infiltration without any change.

Lincomycin + spectinomycin injectable solution is used against infections due to organisms susceptible to lincomycin and / or spectinomycin (including Gram positive bacteria like Staphylococci, beta-haemolytic Streptococci, Mycoplasma species and some Gram negative bacteria) in suckling calves, sheep and goats.

Sheep and goats: Primary and secondary infections of respiratory tract due to mycoplasma and organisms susceptible to lincomycin and spectinomycin, pneumonia, infectious

pleuropneumonia, foot rot due to bacteroides nodosus and agalactia.

Suckling calves (before start of rumination): Treatment of respiratory / digestive infections (pneumo-enteritis) due to organisms susceptible to this drug.

Sheep and goats: 1 ml for 10 kg bodyweight by intramuscular injection once a day

Suckling calves: 1 ml for 10kg bodyweight by intramuscular injection twice in first day and once a day for 2-4 consecutive days.

Lincomycin is not compatible with novobiocin and kanamycin sulfate. Lincomycin precipitates if is used simultaneously with benzyl penicillin and phenytoin.

Macrolides and chloramphenicol have antagonism effect with lincosamides and should not be used simultaneously.

Do not use in animals hypersensitive to this product.

Use of this drug in solipeds may causes colitis.

Use of this drug in non-target animals may causes digestive complications.

In some cases it may causes transient diarrhea in sheep / goats.

Sometimes reduction of appetite and milk quantity is reported in goats after injection. In very rare cases, abortion or death of treated pregnant sheep has been reported during third period of pregnancy.

Keep away from direct light and below 25º C. 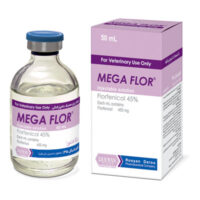 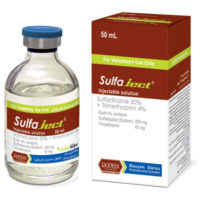